Signs And Types Of Dog Aggression 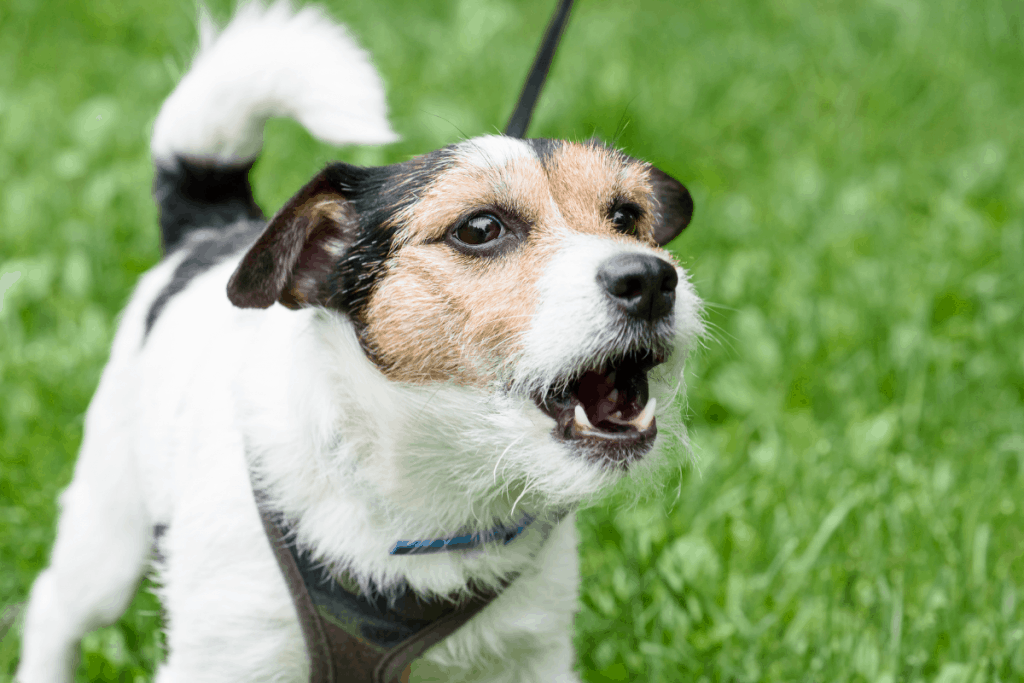 Dog aggression is a common behavior problem that is frequently misunderstood. If you are dealing with an aggressive dog, one of the first steps to take is to learn more about the types and signs of dog aggression. Once you know more about the way dogs communicate, you will be in a better position to manage and train your dog to be less aggressive.

Offensive aggression is when a dog threatens violence in response to a perceived threat. A dog that is offensively aggressive will stand tall with ears and tail up. He curls his lips with the corner of the mouth forward exposing only the incisors and canine teeth. A direct eye stare many precede offensive aggression.

Defensive aggression occurs when a dog feels threatened and is unable to escape the perceived danger. It is based on fear and similar to fear aggression. Dogs exhibit defensive aggression by lowering themselves and shifting their body weight backward. They raise the lips with the corner of the mouth drawn and expose teeth on the side of the mouth along with incisors and canines.

Dog behaviorists identify many different types of dog aggression based on a trigger, target, and motivation. However, neurophysiologists identify two or three types of aggression. Affective aggression can be offensive or defensive and serves to increase the distance between the dog and the threat. Predatory aggression is related to feeding behavior. Play aggression is distinct from the other two but has not been studied well.

Diagnosis: How to help the diagnosis process

Diagnosing dog aggression begins with collecting information about a dog’s development, living situations, temperament, current presentation, the development of the disorder, and a history of recent incidents of aggression.

The history of the pet is broken down into three parts. The first part asks questions about general pet history and management. The second part asks the owner to describe the pet’s behavior in everyday situations. The third part contains information about the actual behavior problem.

The history’s third part includes information about when and where the aggressive behavior occurs, what triggers it, and who is the target. The type of behavior, body language, and facial expression are also important for diagnosis. Information about how people react and how the pet behaves after an incident is also included.

Finally, the frequency and severity of the behavior and what the owner has already tried to treat it are included in the history. The interaction between the owner and the dog is evaluated by collecting descriptions of the way the owner reacts to aggression, how the owner trains and disciples the dog, and how the dog is managed.

Bringing a videotape of the behavior that shows owner-pet interaction and the dog’s body language, training tools, and the dog’s favorite treats is helpful for the diagnosis process.

Fear-induced aggression is the most common diagnosis of aggression in dogs. Some dogs exhibit offensive posturing even when fear is the underlying cause. The distance between the stimulus and the dog and previously learned behaviors can affect the dog’s behavior.

When dogs are behind a barrier or the trigger is far away, they are more likely to show offensive posturing. When the stimulus approaches, dogs’ behavior usually becomes ambiguous or shows signs of fear. A dog on a leash is likely to act aggressively towards other dogs on leashes, but once the leash is removed, he will behave more appropriately.

This is because leashes may cause dogs to feel trapped and unable to retreat. Also, a tight leash may affect a dog’s posture and send misleading signals, especially if the owner is pulling on it. These signals may cause the other dog to react agonistically leading to scuffles. The dog then learns that interactions with other dogs on leashes are unpredictable and dangerous and behaves accordingly.

Sometimes, owners punish their dogs with leash corrections when they are simply excited and exuberant about greeting other dogs. Over time, the dog will learn to associate the approach of other dogs with unpleasantness and pain, leading to defensive behavior.

Resource guarding or possessive aggression can occur over food, toys, or stolen items such as socks, tissues, or plastic wrappers. The aggression is less related to the item than to the expectation of confrontation. This type of aggression can be dangerous and severe.

Dominance aggression usually is directed towards other dogs with which your dog has frequent contact, but can also be directed at strangers or unfamiliar dogs. It usually occurs at a close distance. If your dog shows aggression at stimuli from a distance, dominance is not likely to be the cause.

Territorial behavior occurs in your dog’s territory, usually along the boundary line, usually toward strangers and unfamiliar dogs. Dogs are likely to exhibit this behavior in the home, yard, car, and in areas where they are walked. It tends to be most intense in small areas. Territorial and protective behavior manifests at about six months of age when dogs are approaching social maturity.

Other types of aggression

When making a diagnosis, other types of dog aggression towards humans should be considered. Most types of aggression can be redirected towards a different target and have a learned component.

Excitement-induced aggression: Excitable dogs are more likely to be aggressive and show other behavior problems. Although this can be harmful, over-excitement that appears aggressive is not true aggression because the intent is not to do harm. Excitement can be addressed through training and leash manners.

Maternal aggression: Female dogs with new puppies can behave aggressively towards household members and strangers. Maternal aggression can include growling, snarling, and biting in order to protect the puppies from a perceived threat. This usually subsides over time as the litter gets older.

Disease-induced irritable aggression: Certain medical conditions can cause dogs to be irritable and aggressive. A physical examination, blood tests, and urinalysis should be performed to rule out diseases and neurological disorders. Conditions that might cause aggression include hepatic encephalopathy, hypothyroidism, seizures, brain tumors, renal failure, rabies, and Cushing’s disease.

There are many factors that affect aggression in dogs. Oftentimes, a combination of factors can contribute to the development of aggressive behavior. There are two main categories of aggression problems. The first is normal dogs that exhibit unacceptable behavior, and the second is abnormal dogs overreacting to the environment.

Perinatal factors relate to the environment before birth and maternal and sibling interactions. Maternal stress or postnatal stress can have a lasting and permanent impact on the way animals react to future stress. Low-level perinatal stress is protective, but severe or prolonged stress can create serious problems later in life.

Experience refers to socialization and learning. Providing dogs with opportunities to interact with other people and dogs is important for their normal development. Without proper socialization, dogs might develop a fear of new dogs and people, which leads to competitive interactions as they mature.

Learning modifies all forms of aggression. If a dog learns that aggressive behavior gets him what he wants, it will encourage him to repeat that behavior in the future. Therefore, it is important to avoid trigger situations during management and treatment.

Genetics, hormones, and neurophysiologic factors are biologic correlates. Selection in dog breeds has resulted in changes in social competency meaning that some breeds are more likely to be aggressive than others. Aggressive tendencies have been found in lines or families within a breed and even in certain coat color patterns.

Studies have shown that 81 percent of Golden Retrievers behave aggressively toward dogs and humans according to their owners. Another group of studies showed that a boldness/shyness personality factor in dogs is inheritable.

Hormones are another factor that affects aggression. Testosterone influences the expression of aggressive behavior in dogs, although there is a complex interplay between testosterone, social status, neurotransmitter systems, gender, and environment.

Castration of male dogs somewhat reduces territoriality and aggression towards other dogs, but it is more effective at reducing mounting, urine marking, and roaming. Spaying female dogs has not been shown to influence aggressive behavior.

Neurophysiologic factors also play a role. One study has found lower levels of the serotonin metabolite 5-HIAA in the cerebrospinal fluid of aggressive dogs compared to non-aggressive dogs. Others have found differences in serotonin receptor densities and function in some areas of the brain.

Biologic factors may be most relevant for reactive dogs who respond to mild and nonthreatening stimuli in a volatile manner. A hyperresponsive amygdala can lead to emotional disturbances in dogs because it sends false alarms and activates the fight-flight system, triggering fear and anxiety.