Training And Exercises To Help An Aggressive Dog 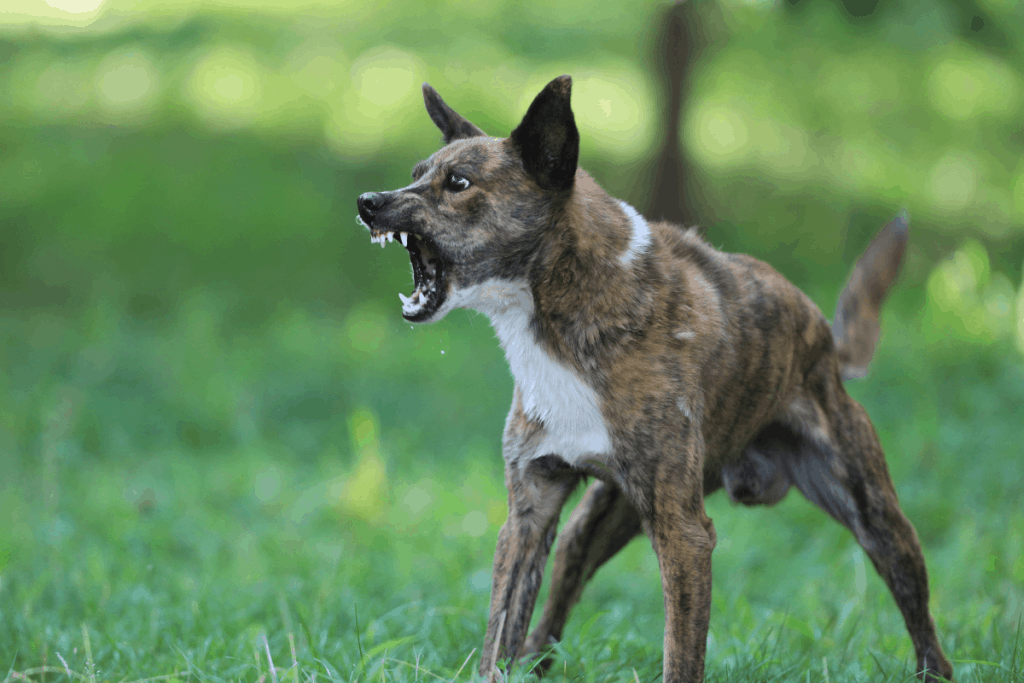 A central aspect of training for an aggressive dog is basic cue response. A cue is an event that triggers a known behavior. It can be something in the environment, a hand signal, or a spoken word. Basic cue training is important for all dogs but especially essential in the case of aggressive dogs. Few aggressive dogs are proficient at basic obedience behavior.

Obedience training won’t solve aggression, but it is an important way for owners who want to know how to help an aggressive dog find alternate ways to respond. Cue training helps provide clarity and safety to dogs in uncertain situations.

Training dogs to respond consistently and reliably to basic cues and practicing the responses prepares them for the unexpected. Providing treats to reward calm responses conditions dogs to remain calm and relaxed while they perform the behaviors.

Dogs should be trained to respond to cues for “sit,” “down,” “stay,” and “come.” They should be able to walk calmly on a leash and respond to their name by orienting to the owner. Targeting exercises teach a dog to touch a designated body part to a location. Nose targeting is the most common form. Targeting can be used to reorient a distracted dog or lead him away from trouble.

Positive reinforcement is a key to successful training for an aggressive dog. It establishes an association between a positive emotional response to the cue and the performance of the behavior. Using punishment during training can cause more behavior problems rather than solving them. Bridge signals, clickers, and whistles can be used to help improve clarity for an aggressive dog.

Establishing owner-focused interactions involves setting specific behavior expectations for any interactions with the dog, such as petting, training, feeding, and putting on a collar. It is particularly effective to interact with the dog only when he is calm. Family members and visitors should be encouraged to abide by these rules.

Owners should require four criteria of the dog, which can be introduced one at a time or together depending on the specific circumstances. Dogs should be expected to respond to requested cue behavior within a certain time frame, remain calm throughout the interaction, remain focused on the owner by making eye contact, and stay outside of the owner’s “personal space.”

The most important criteria are focus and calmness. If a dog fails to maintain the established criteria throughout the interaction, the owner should stop the interaction and redirect the dog. No verbal or physical punishment should be used. Once the dog is behaving appropriately, the owner can resume or restart the interaction.

Food-guarding is a common behavior in dogs and probably a variant of normal behavior. Undesirable and potentially dangerous, food bowl aggression should be addressed with one of the following management techniques.

To manage food aggression, let the dog eat in a closed room uninterrupted. the owner should put the food bowl in a room with the door closed while the dog is outside the room. Next, the owner leaves the room and sends to dog in to eat with the door securely closed. When the dog is finished eating, the owner calls the dog out of the room, goes in, and removes the bowl.

If there are children in the home, be sure to securely close the door with a latch to prevent them from accidentally disturbing the dog during meals.

Another optional intervention that can help eliminate food-related aggression is desensitizing training. However, this technique can be risky and should only be used in individually evaluated situations.

Desensitizing involves introducing a new food bowl, such as an old saucepan with a long handle, and feeding the dog in a different place. This serves to disassociate feeding from previous confrontations. During the initial interactions, the dog should be tied.

Measure out the usual amount of food but only place three kibbles in the pan at a time. Ask your dog to sit, lower the pan by the handle, and hold the handle while your dog eats. When he finishes, ask him to sit again, and repeat the process until the food is consumed.

The next step is to put one-third of the meal in the bowl and use a ladle to add more food while the dog is eating. Finally, all the food can be given at once and strong-smelling treats can be added as the dog eats. When done correctly, most dogs eventually will accept the owner’s presence during meals. It is not recommended to try to touch the dog while he eats.

Aggression over stolen food is a common and potentially dangerous situation. It is best to avoid the possibility of your dog stealing human food in the first place by keeping him away when food is being prepared or consumed. Children should not be allowed to walk around the home eating if the dog is in the house.

If it happens that your dog steals human food, do not try to take it away. In the future, food-stealing can be prevented by storing food out of the dog’s reach or keeping the dog out of areas where food is stored. Putting a garbage can for food waste under the sink is recommended. If a certain food item triggers aggression, it should be avoided or consumed only when the dog is securely confined.

Conflict can also arise in the case of guarding stolen items or toys. Called “resource guarding” or “possessive aggression,” this type of aggression often occurs in specific contexts. Guarding resources is a natural behavior in dogs. It can happen with food and other items such as socks, facial tissues, or plastic wrappers.

Resource guarding can be severe and dangerous and is often related to conflict-induced aggression. In puppies, it can lead to aggression toward household members later in life.

Owners sometimes reinforce possessive aggression in puppies when they try to retrieve stolen objects. Some puppies may become afraid and hide under a bed. If the owner reaches for them, they show fear-related aggression. If the owner backs away, it reinforces the aggressive behavior.

Other puppies might think that it is a game when the owner tries to catch them. The owner’s reaction then positively reinforces the aggressive behavior.

It can help to teach a puppy to accept giving up stolen items by replacing them with treats or new toys. Dogs who learn they will be rewarded when they give up an item might actually look forward to having things taken away from them.

How to do basic exchange exercise/training

Basic exchange exercise/training is a technique used to teach dogs the release command. During the training, it is best to remove all valuable items or use a head halter with a dragline to control your dog.

If the dog gets an object, you can toss a desirable treat at a distance to encourage the dog to drop it and go to the treat. Let the dog get the treat and then lead him away from the stolen object. Once the dog is securely confined, the object can be retrieved. Only adults should attempt to use this technique.

A good exercise for basic exchange training is to put an object that your dog doesn’t have a strong desire about three feet away. Give a release cue, remove the object, and give a reward. Repeat this exercise with the object slightly closer to your dog. After your dog learns to sit quietly, a more valuable object can be used and more desirable treats should be offered.

Running “cold trials” by encouraging your dog to release items he values in exchange for treats is important. New people who will handle the dog must follow the same protocol, and the exercise should be repeated in various locations. A release cue using a clicker can also be helpful when engaging in treatment for resource guarding.