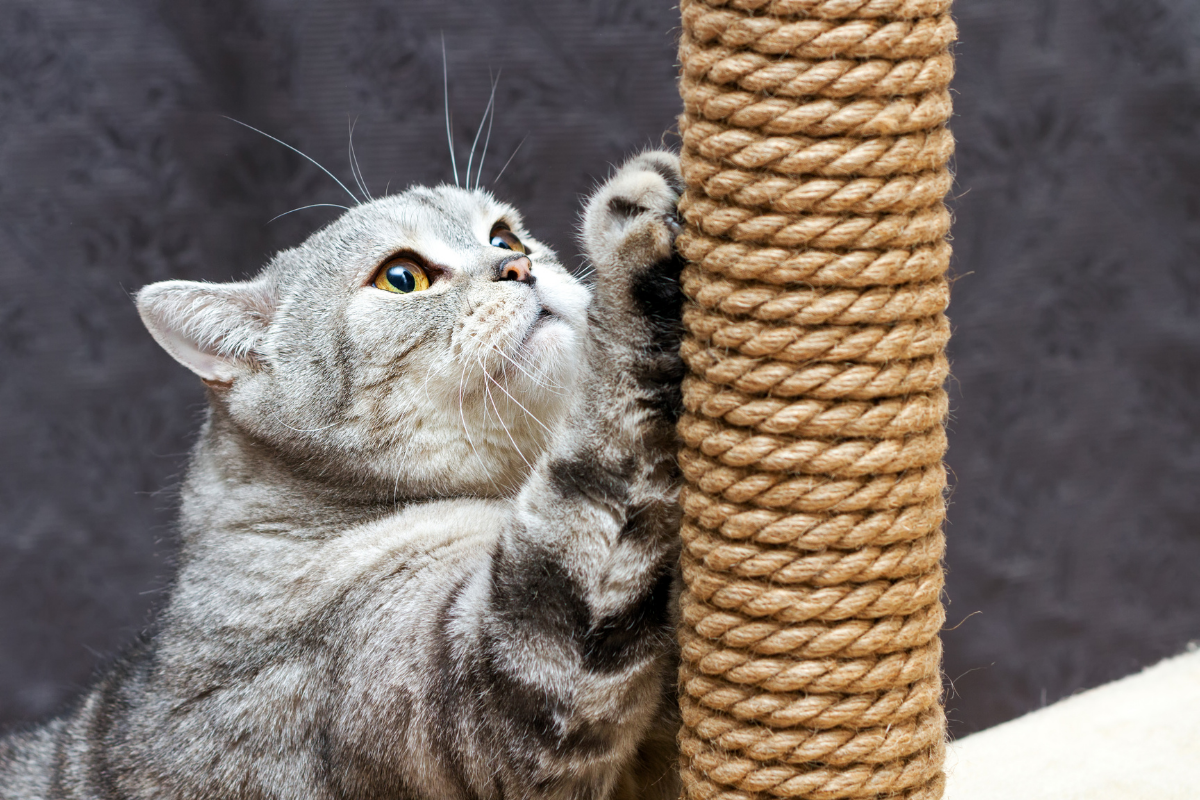 If your cat is shredding your furniture to pieces, you are not alone. Cat scratching is one of the most common problems reported by cat owners. It is also a normal part of feline behavior that benefits cats in many ways. While scratching causes no harm for cats living in the wild, inappropriate scratching inside a home can be very destructive.

Understanding cat scratching behavior is the key to finding solutions. In this article, we will explain why cats scratch and what you should and should not do about it. In the first part, we will look at why cats scratch, why it is good for them, and how common it is. In the next three parts, we will explain why declawing cats is a bad idea, how to stop destructive scratching, and how to find the perfect scratching post.

Scratching serves many purposes for cats. Although it is often referred to as sharpening the claws, it actually is much more than that. When cats scratch, they are not only sharpening and removing the sheaths of their nails; they are also stretching their front legs and upper bodies and marking their territory around other cats.

Scratching is good for cats. It benefits them physically, socially, and mentally. It keeps their claws in good condition, stretches and exercises their muscles, and maintains the system that allows them to extend and retract their claws. Even more importantly, scratching is used as a form of communication between cats.

When cats scratch, they are leaving behind both visual evidence and scents and pheromones from the glands in their paws. These are important ways for cats to send social messages to other cats and can help to avoid conflict. Scratching is also a way for them to say they own you and your home.

Scratching serves as an emotional outlet for cats. After a stressful experience, scratching can help cats feel calm and relaxed. When cats are experiencing an unusual amount of stress or social tension with other cats in the household, they are likely to increase their scratching and other marking behaviors, especially in areas of the home where they feel insecure.

Because scratching serves so many vital purposes, it is crucial for a cat’s well-being and cannot be eliminated. That doesn’t mean you must let your cat destroy your home.

Because scratching is normal and natural behavior, cat owners should never punish their cats for scratching furniture. Punishing cats causes stress and is likely to lead to anxiety-related behaviors, avoidance, fear, and aggression. This might cause them to scratch even more or to scratch in new places. In time, the bond between the cat and the owner will be damaged.

How common is undesirable scratching?

About 60 percent of cat owners report undesirable scratching. Some studies put the number at almost 84 percent. According to one study, it is the second-most common behavior problem in cats. Another study found that it is the third-most-common behavioral reason why people relinquish their cats to a shelter.

Cat scratching is not malicious. It is a common, normal, and natural way for cats to interact with their environment. A variety of emotions can accompany scratching. Some cats find scratching enjoyable while others might seem to be agitated. Even declawed cats might go through the motions of scratching. (Why declawing cats is a very bad idea will be discussed in part 2 of this article.)

Cats might have different preferences when it comes to scratching surfaces and materials. Some would rather scratch on horizontal surfaces and others on vertical ones. Some take short strokes, and others take long strokes. Whatever their preferences, all cats find a way to satisfy their need to scratch.

According to an internet survey, only 55 percent of respondents provided a scratching post for their cat. When cats don’t have the opportunity to scratch appropriate items, they will scratch whatever they find that is to their liking. A cat scratching couch, chairs, carpet, wood, and door and window frames can be frustrating for owners.

Scratching humans and other pets can happen if a cat is overstimulated or feels threatened. Biting and scratching are a normal part of development for kittens. When trained early, kittens will learn not to use their claws and teeth inappropriately.

Cat scratching is completely normal behavior, but destructive scratching can be a serious and frustrating problem for many cat owners. Once you understand the reasons why cats scratch, you are better prepared to address the problem of inappropriate scratching and restore harmony to your home.