Why Does My Cat Scratch Me When I Pet Him 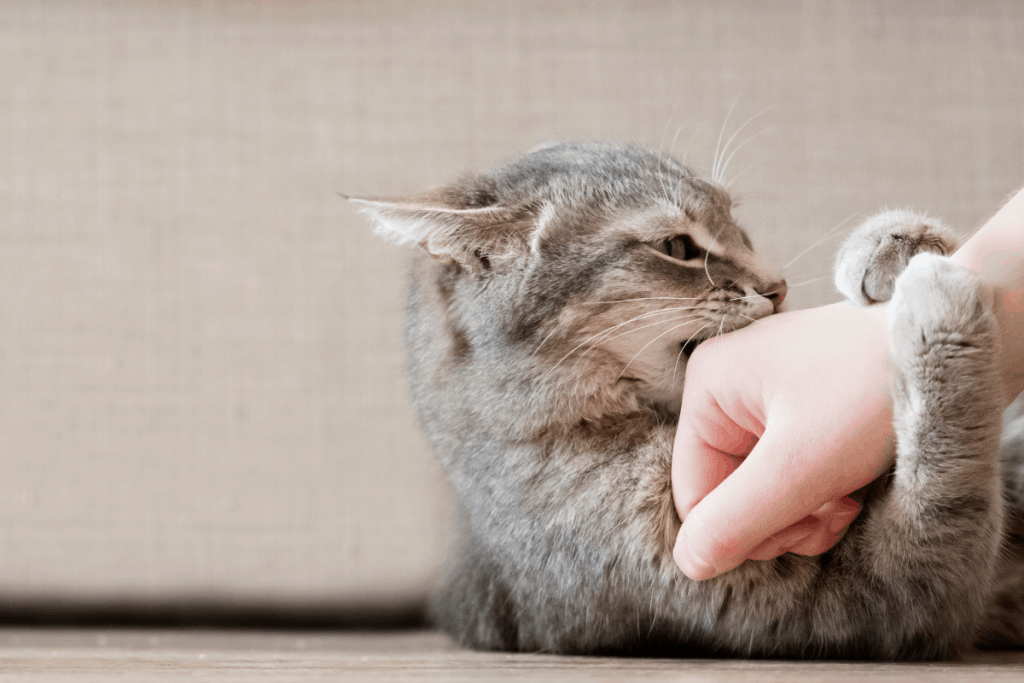 TL;DR: Reasons why your cat scratches you when you pet him include overstimulation, poor socialization, petting intolerance, fear, and playfulness. While most cats enjoy petting, not all do. Even if your cat enjoys being pet, she might have a limit to how much petting she prefers. Her enjoyment might turn to fear causing her to lash out. It is important for cat owners to pay attention to physical signs that their cat is agitated and to stop petting before getting scratched or bitten.

We all love our cats, but sometimes they behave in mysterious ways. One minute, your cat can be all purrs as you pet him, and then suddenly, he might change his mood abruptly and scratch or bite you. Other cats will scratch you when you first initiate petting, when you stop petting them, or when you pet them in a sensitive area such as their belly, behind, or tail.

In answering the question why does my cat scratch me when I pet him, it is important to understand that not all cats like to be pet. Some cats won’t tolerate any petting whatsoever. Most cats enjoy a certain amount of petting but have their limits. Petting-intolerance or petting-related aggression refers to cats who prefer not to be pet or crave attention but only in limited doses. Once they reach their threshold, they might lash out and run away.

This behavior can be jarring and confusing for pet owners and family members alike, but for the cats themselves, it makes perfect sense. Once they have had enough, they want to let you know they are ready to move on. Remember, cats value their independence and don’t always want to be at your beck and call.

Why does my cat scratch me when I stop petting?

While some cats don’t tolerate petting or only want a limited amount of petting, there are others who just can’t seem to get enough love. Cats who crave endless amounts of attention might scratch you when you stop petting them. They might be trying to tap or grab your arm to get your attention and tell you not to stop. Using their claws might be accidental and unintended.

Why does my cat scratch me when I try to pet her?

If your cat scratches you every time you try to pet her, she just might not like being stroked at all. Cats who don’t tolerate petting might not be socialized well to humans. They might not have been handled enough as kittens or be nervous by nature. Perhaps they experienced trauma in their past. If you are patient, you might be able to get her used to being pet, but it is best not to force petting on her and to be on the lookout for signs of stress.

Why does my cat scratch me after petting?

You’ve just finished a nice petting session with your cat and both of you seem happy and satisfied. But before you know it, your cat scratches you. What causes a cat to scratch you after petting? It is likely the same scenario as a cat who scratches you when you stop petting her. She is probably telling you that she would like you to start petting her again and isn’t quite as satisfied as you thought.

Why does my cat scratch me when I rub her belly?

Some cats don’t like to be touched in sensitive areas such as the belly, behind, or tail because it makes them feel vulnerable. Research has shown that most cats prefer being pet on their head, behind their ears, around their neck, and under their chin. If your cat scratches you when you rub her belly, she is probably telling you to stop. Another possibility is that she is trying to play a game with you, especially if she is a kitten. It also could be a sign that she is not feeling well.

Why does my cat bite and scratch me when I pet her ?

When cats bite and scratch while being pet, it is called ‘petting and biting syndrome.’ This common condition is caused by their emotional confusion. They might want to be pet but are also somewhat fearful at the same time. When their fear overcomes their desire to be pet, they bite and scratch you to let you know. Cats who scratch and bite during petting might do so because they are overstimulated.

Understanding some basic characteristics of cats can help us understand why some cats experience this emotional confusion. Petting is not something that occurs in nature. When cats show affection for one another, they rub against each other, twine their tails, or groom each other usually for a short amount of time. This friendly time often ends in a spat initiated by one of the cats.

Cat owners, on the other hand, often can’t resist showing physical affection for their cats. If you indulge in too much hugging, petting, and kissing of your cat, you might be causing an increase in stress and anxiety. When cats are irritated because they are being touched too much, they have limited ways to communicate how they feel. Biting and scratching are good ways for them to get attention.

The best way to avoid getting scratched or bitten by your cat during petting is to be aware of the signs of stress that precede an attack. If your cat is flattening her ears, lashing her tail, or suddenly freezes and stops moving, you should stop petting her immediately. Try to avoid encouraging the behavior by not giving attention to your cat when she bites or scratches you.