Why Does My Cat Scratch Me When I Sleep 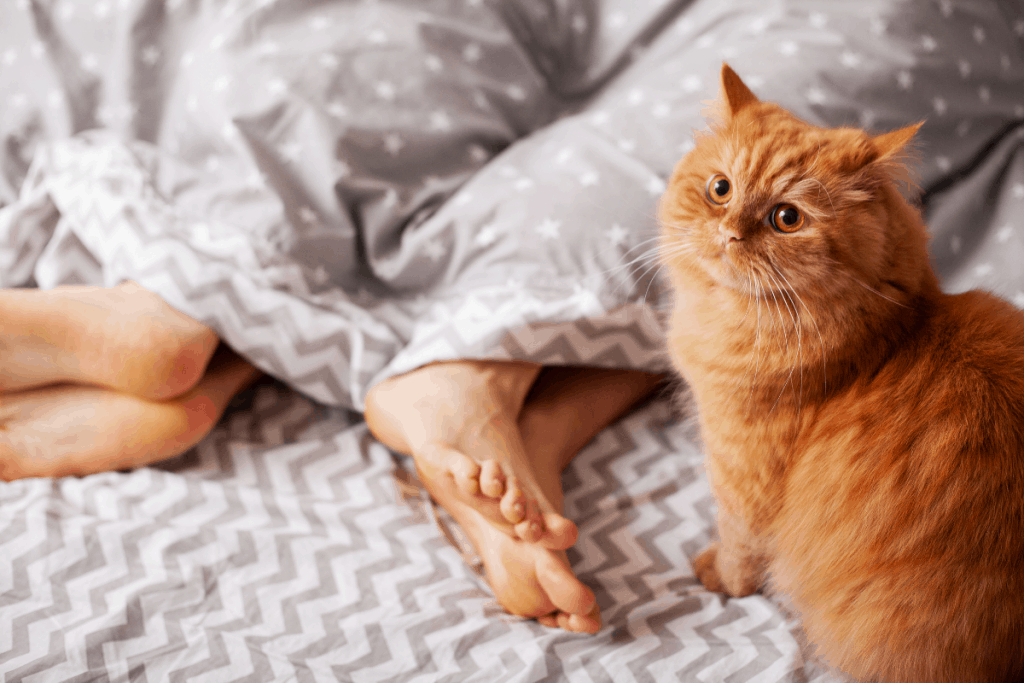 TL;DR: Cats scratching their owners while they sleep is an example of cat aggression toward owners that can become a nuisance and a serious problem. The best way to address this behavior is to understand the reasons behind it. Some reasons why cats might scratch you at night include physical problems, fear, wanting attention, and predatory behavior. The fact that cats are more active at night is another factor to keep in mind.

Getting a good night’s sleep is important for your health, but it can be a challenge if you have a cat attacking you and scratching you at night. Cats can be aggressive towards their owners and family members for a variety of reasons. Understanding cat aggression can help you answer the question why does my cat scratch me when I sleep and figure out what to do about it.

Some of the main reasons why cats are aggressive towards their owners include inadequate socialization, fear, inappropriate play, an aversive stimulus, maternal aggression, or health problems such as hormonal dysfunction, infection, pain, or neurological and metabolic problems. Aggression in cats can lead to serious injuries to owners and family members.

If your cat is scratching you when you’re sleeping, you will want to get to the root of the problem. Once you determine the cause of this behavior, there is a good chance that you will find a way to stop it from occurring.

Why does my cat scratch me when I’m asleep?

A cat scratching you when you’re asleep is not just annoying but also can be dangerous. When you’re sleeping, you aren’t prepared for an attack and won’t see the changes in body language that usually precede aggression like flattened ears and an arched back. Thus, you are less likely to have an opportunity to avoid getting scratched if you’re sleeping.

Since you aren’t interacting with your cat when you’re asleep, it is unlikely that fear, play, or an aversive stimulus will cause him to scratch you. More common causes for this behavior might be seeking attention, wanting to be fed, boredom, not receiving enough stimulation, owners playing roughly during the day, or health problems.

Why does my cat scratch me at night?

Another reason why your cat might scratch you when you’re asleep is simply that cats, by nature, are more active at night. Cats are crepuscular animals, which means they are most active at dawn and dusk and tend to sleep during midday. Therefore, they are most playful in the evening and early morning at the times you are more likely to sleep.

Encouraging appropriate play in the evening before bed might help prevent attacks at night. Always keeping your hands, feet, and body at a safe distance when playing with your cat will help prevent injuries and keep your cat from developing a habit of attacking and scratching you when you sleep.

This is often referred to as inappropriate play. It is most common in young cats, early-weaned cats, cats who lack sufficient stimulation, cats in single-cat households, cats whose owners play roughly with them, indoor cats, and Bengal cats.

Why does my cat scratch me awake?

A cat who has had previous traumatic experiences with people or cats who did not have enough contact with people during their first nine weeks are more likely to develop fear. When the feared object is not accessible, cats can turn their aggression against an alternative stimulus.

This type of aggression is called a redirected attack and can occur at night. It can be caused by loud noises or the presence of unfamiliar people. If you think that fear might be causing your cat to scratch you, try to make adjustments to the environment that will increase his sense of safety and security. Try to avoid sudden movements and make sure your cat has some control over her environment.

Why does my cat scratch me for attention?

The reasons why your cat scratches you for attention are very similar to those described above. Probably she is trying to tell you she is hungry or wants to play. She might not be getting enough attention during the day, and she might simply be bored.

If you think that your cat is scratching you to get attention for any of these reasons, you can try to address them before bedtime. Be sure to give enough food during the day and to make appropriate play a part of your daily routine. The best times of day to play with your cat are when you come home from work, after a rest period, and in the early evening.

Another reason why your cat might scratch you for attention is that it works. Cats learn that certain behaviors elicit specific responses from their owners. If in the past you have responded to your cat’s aggressive scratching by giving her attention, even negative attention, she might continue to behave this way.

The best solution for this problem is to avoid giving your cat attention when she misbehaves. Of course, this is easier said than done. One of my cats has acquired some very bad habits that work well to get my attention, and I am still working on trying to stop reacting. If possible, it’s best to avoid getting into this pattern in the first place.