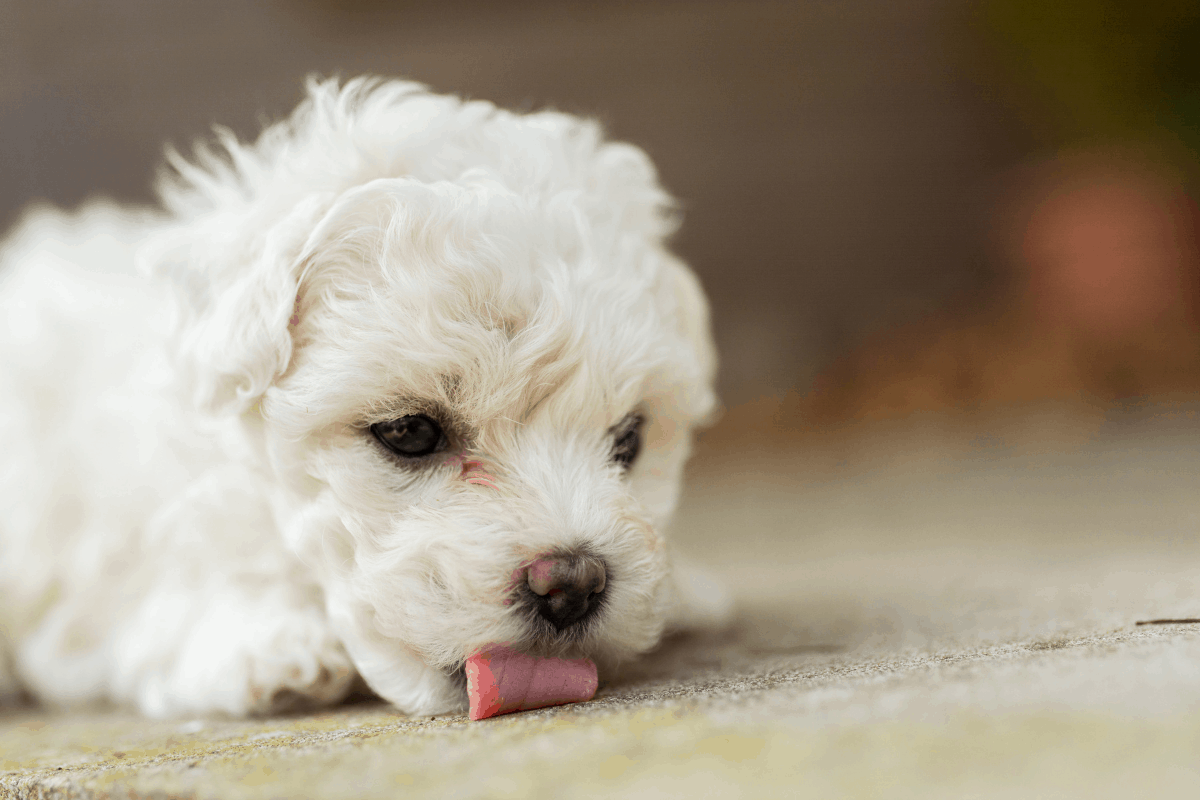 TL;DR: Excessively licking floors and other surfaces is not a typical canine behavior, especially when it begins suddenly and happens frequently. A study in Montreal found a correlation between identifying and treating GI illnesses and a decrease in excessive licking. If your dog has suddenly begun licking surfaces in your house, it may be worth a trip to the vet to rule out or treat a gastrointestinal cause.

Why is my dog licking the floor all of a sudden?

As dog owners, we are very familiar with our dog’s tongues being all over our bodies and our houses. Dogs lick your hand for affection, their skin when it is itchy, and their food bowl to get the last remnants of their meals.

But what does it mean when your dog’s habits change very suddenly and they begin licking surfaces around your house, including the floor? Pups with excessive licking behaviors will run their tongue over any flooring material in your house, from cement to carpet to tile. Owners experiencing this concern with their dog often report incessant licking of any surfaces in their house, including walls and furniture, both indoor and outdoor.

This new behavior could signal a larger issue with your dog’s health, so it is important to look into potential causes.

What does science say about my dog constantly licking the floor?

The reasons that a dog might lick floors, walls and furniture are numerous and varied. Some veterinarians might trace the root of these behaviors to obsessive-compulsive disorder, anxiety, or cognitive changes.

While these are causes for some dogs, research conducted at the University of Montreal Teaching Veterinary Hospital indicates that the underlying issues behind your pet’s excessive licking may be related to his gastrointestinal tract.

Exploring a link between gastrointestinal illnesses and licking

In order to investigate the correlation between repetitive licking of surfaces and the gastrointestinal tract, researchers designed a study that placed participating dogs into one of two groups based on behaviors and health history. The first group consisted of dogs whose owners had previously sought medical help for their dog’s excessive licking behaviors. The second was a control group who reported no health concerns or perpetual licking prior to the study.

To begin, each dog in both groups was given a full medical evaluation. First, any dermatological concerns or other abnormalities that might contribute to the licking behaviors were identified and treated. This was done prior to further internal assessments in order to control for alternative causes for the licking behaviors. After the physical exam, the dogs had a full gastrointestinal evaluation, including bloodwork and a fecal study.

Following the medical evaluations, each of the dogs was video recorded by the researchers to determine their behaviors prior to and following a controlled meal. Information about the dog’s posture, breathing, movements, and vocalizations was recorded so that researchers could understand how the dogs typically behaved following a meal, which can be a triggering event for a gastrointestinal issue. Owners also completed questionnaires to help determine the types and intensity of behaviors that they observed in the home environment. This helped researchers to rule out anxiety and stress responses as potential behavioral causes within the veterinary setting.

Once the clinical evaluations were completed, a veterinary internist assessed all of the findings and made any necessary diagnoses, and recommended treatment protocols for the pets.

If there was no identifiable gastrointestinal illness, a nondescript treatment that involved altering the dog’s diet or giving over-the-counter antacids was recommended. Once the pets had been prescribed their protocol, the owners were to note their dog’s symptoms in a logbook.

In order to assess the impact of gastrointestinal treatments on surface licking, the owners of the dogs in the study implemented the protocols and logged behavior data for 90 days. They observed their pets and recorded any licking behaviors and other symptoms of gastrointestinal issues. Those in the control group were asked to log any newly developed licking or gastrointestinal behaviors. Each 30 day cycle, the researchers collected and examined the logs and recommended adjustments to the treatment plans or the observation window as needed.

When analyzing the data, researchers compared the post-treatment data to the baseline information collected during the initial evaluations and questionnaires. A four-point scale was used to indicate the degree of change in the licking behaviors for both the frequency with which the licking occurred and the duration that it lasted on each occasion.

Dogs who licked as much post-treatment as they did at the beginning of the study scored a 1, whereas dogs that stopped licking altogether scored a 4. Scores of 3 or 4 for both frequency and duration indicated a positive outcome, whereas 1 and 2 were considered a negative outcome of the treatment protocol.

To determine the validity of their claim that gastrointestinal issues can cause surface licking, the researchers compiled data on the percentage of dogs that experienced a positive outcome in the study.

By day 90, 59 percent of the dogs with prior licking behaviors showed a positive outcome and 9 of the 17 dogs had ceased surface licking altogether. Only one dog in this group made no improvement at all. These results indicated a link between excessive licking and treatment for gastrointestinal illness.

In addition, the researchers found that the specific type of gastrointestinal illness did not impact the outcome for the dogs. Pets with fully resolved symptoms received one of several different gastrointestinal diagnoses. This indicates that excessive licking may be a common symptom of general abdominal dysfunction, such as diarrhea and vomiting.

What does this mean for you and your pet?

If you are frequently asking yourself, “why is my dog licking the floor constantly?”, this study provides a potential path of diagnosis and treatment for your pet. Particularly if you and your vet have ruled out some of the other causes, such as anxiety, stress and obsessive-compulsive disorder, you may want to consider an underlying gastrointestinal illness.

Since the full panel of testing that the dogs in this study were given can be incredibly expensive and invasive, these illnesses may be harder to pinpoint or rule out.

You can use some of the parameters of this study to help you collect your observations to point your vet in the right direction if your dog is licking excessively and you suspect a gastrointestinal cause.

Keep a log of your pet’s licking behaviors, the times of day and activities when they most often occur, and other signs of gastrointestinal issues that you observe. Share this information with your dog’s vet in order to narrow down possible testing or treatment protocols to reduce invasive procedures and expenses and help get your pet on the path to recovery.

What are other signs of gastrointestinal issues?

In order to help diagnose your pet, it is important to know some of the other symptoms of gastrointestinal illnesses. Diarrhea is a common symptom that nearly every dog owner is well acquainted with. A short bout can indicate something fairly benign, such as eating too much or ingesting non-food items.

However, diarrhea that is prolonged or occurs in conjunction with other symptoms can be indicative of a more serious gastrointestinal issue that may require treatment to resolve. It is important to alert your vet if your dog suffers from prolonged or recurrent diarrhea.

Abdominal pain is another frequent symptom of gastrointestinal illnesses. While this can be a difficult ailment to pinpoint on its own, it is usually accompanied by other telltale signs. Much like us, our pets may eat less or experience lethargy when their abdomen hurts. Your pup might also lick his lips or the air if the abdominal pain is causing nausea. Dogs often eat grass to alleviate abdominal discomfort and quell nausea, so this is another good indication of abdominal pain

If your dog is in significant gastrointestinal distress, he may vomit. It is important to note that vomiting is different from regurgitation, which is more common and usually involves your dog coughing up undigested food that they have recently eaten. If you’re wondering why your dog is eating grass then throwing up, well, it is also a common sign of gastrointestinal issues.

Vomiting, on the other hand, is a similar experience for our pets as it is for us when we are suffering from a stomach bug. It is forceful and is typically preceded by drooling and contractions in the abdominal area.

Much like diarrhea, vomiting can either be an isolated experience, or your pet could get sick repeatedly. Since vomiting is a common symptom of nearly any illness, especially gastrointestinal diseases, it can be tricky to narrow down the cause without carefully examining your dog’s other behaviors. Be sure to call your vet right away if your dog is struggling with persistent vomiting to rule out serious gastrointestinal illnesses.